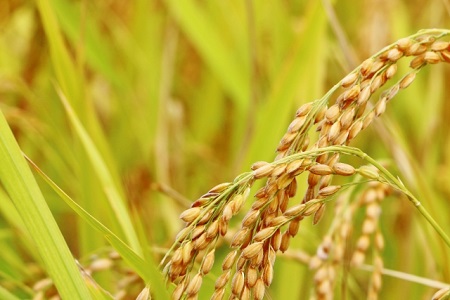 “Hassaku” means “1st of August” (in the old lunar calendar). This day falls between the 24th of August and 23rd of September in the solar calendar.

Early-ripening varieties of rice bear around Hassaku (it depends on the area or plant varieties), so farmers used to have a preparatory celebration on this day.

Also, because the Japanese word “ta-no mi (田の実)” which means “seed of the field” has the same sound as “tanomi (頼み)” which means “relying on” or “leaning on”, people started to give presents (mostly first crops of the season) to their benefactors. From this custom, this day is called “Tanomi-no Sekku (田の実の節句)”, too. (Sekku / 節句 means seasonal festival.)

Later, this custom spread to samurai families and court nobles, and they started to give presents to each other. This custom is called “Hassaku Sekku (八朔節供) or “Hassaku-no Iwai (八朔の祝い)”. (Iwai / 祝い means celebration.)

MINATO cafe
~ Enjoy the view from Sakurajima Port and the original cafe menu! ~