The 3rd of March is the girl’s festival. People decorate their house with Hina dolls and invoke their daughter’s good health and growth. 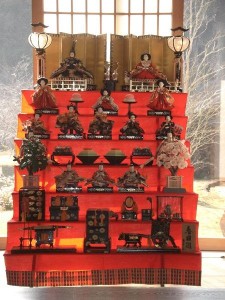 But, originally this event was not for girls. It originated in China. Around AD 300, an event “Joshi-setsu (上巳節)” was begun. “Joshi (Jomi / 上巳)” means the day of the Snake (the sixth of the twelve signs of the Chinese zodiac) early in March. People used to think that devils tend to come inside of houses or their bodies when the seasons change, so they used to purify themselves at the waterside.

Japanese envoys to China during the Tang Dynasty brought this custom back to Japan. Japanese people had a custom of purifying themselves with water before that, and these two customs were merged.

Later, people started to hold  “Kyokusui-no En (曲水の宴 / providing poems in front of a stream)” as an event for purification on Joshi. They also started another custom in which they transfered their uncleanliness and bad luck into dolls made with paper, straw and grass (tachi-bina), and floated  them away. 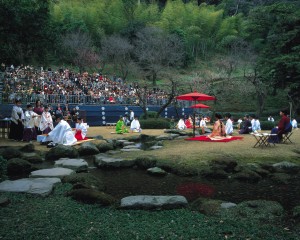 This custom spread throughout the samurai class, and the Tokugawa shogunate established “Joshi-no Sekku (上巳の節句 / the seasonal festival of Joshi)” as one of five seasonal festivals. Then, this day became “The Girl’s Festival (Hina-matsuri / 雛祭り)” as opposed to “The Boy’s Festival” which is held on the 5th of May.
People also used to make dolls to keep evil spirits away from their children.

The Girl’s Festival is also called “Momo-no Sekku (桃の節句 / a seasonal festival of peach blossom”. This is not only the season of peach blossom, but people used to think that peach trees were holy trees which removed devils. 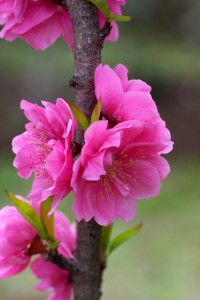 On the other hand, in the Heian period, girls from the noble classes used to play with paper dolls (Hina / Hiina asobi). “Hina (雛)” means small and cute things.
Later, people begun to make a pair of a man and a woman doll to remove their bad luck into. Doll making skill progressed, and gorgeous dolls started to be made. People started to decorate the dolls rather than float them away. Upper-class people started to give gorgeous hina dolls as one of a bride’s household effects, and people liked the dolls in wedding costumes and with wedding tools.

The Tokugawa shogunate established “Joshi-no Sekku (the seasonal festival of Joshi)” as one of five seasonal festivals, and Hina dolls became a symbol of the financial power of the family.
Thus people started to buy hina dolls to remove baby girls’ bad luck, and celebrate the girls’ festival, invoking their good health and growth. 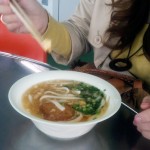 Japanese noodle "udon" has a simple taste, b...