——
Damian Hill
Teacher and manager at KOOKA KIDS ENGLISH HOUSE. He has worked as a translator and interpreter, and also as a reporter on MBC radio, MBC TV and KYT TV.
KOOKA KIDS ENGLISH HOUSE is an English-only preschool and kindergarten. The school motto is “Don’t speak Japanese, tell the truth and try to do things by yourself”. The students are able to say complex sentences after a while. Damian is enjoying teaching children, aiming to help them build their English ability and independence at the same time. The school also has classes for Japanese kindergarten and primary school students, and toddlers-with-parents. They also hold an “English Café” for adults. Damian is 42 years old.
—— 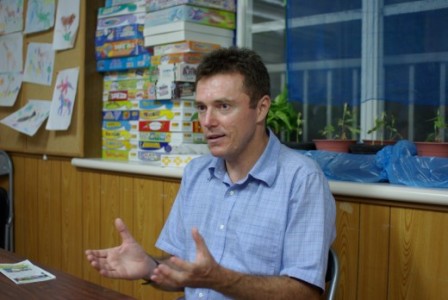 Damian is an Australian who attended the Kagoshima Internationalization Council (KIC) “Formal Christmas Party” held last year. He livened up the party with his cheerful and friendly character. He loves his 10 yrs. old son and he enjoys mountain biking, swimming and hiking with him.

He used to be a celebrity on MBC and KYT, so you might know him as “Hilly” from “Hilly-no Karaimo Eikaiwa”, “Don-kago” or “Ken Navi”.  This time, Damian who speaks fluent Kagoshima dialect talks about Kagoshima and his life.

1. Things which brought Damian to Kagoshima

- What brought you to Kagoshima？

Damian: I came to Kagoshima in 2001, so I’ve been here for 12 years. I lived in Hokkaido and Kyoto for about 3 years before I came to Kagoshima. I first came to Japan as an exchange student when I was in high school. I was 18 years old. At that time, I stayed in Yamaguchi prefecture for about 5 weeks, and I thought Japan would be a nice country to live in.

Damian: Japanese people might say “no, no, you foreign people are kinder”, but, for me I felt warmth when I first came to Japan. Japanese people show foreigners kindness and a warm welcome. I couldn’t speak Japanese at that time, but people taught me many things patiently and listened to me carefully. They also took me many places.
After I went back to Australia, I went to university and started to work, but I wanted to come to Japan again, and I came when I was 22 years old.
Japan and Australia are very different with respect to language, history and culture, so I found Japan extremely interesting.

Damian: Japan was very different from what I’d learnt at school. All experiences were new and the culture very different. I found that by learning a little Japanese, I could communicate with people who can’t speak English and understand Japan more deeply. If you travel around Japan, the dialect changes and you realize that the scenery and culture is different depending on the area. It was very interesting for me.

It was a joke at first, but I had three purposes in Japan when I was 22: I wanted to set foot in all 47 prefectures, I wanted to be able to communicate with people in Japanese, and I wanted to learn lots of oyaji-gyagu (puns).

I really wanted to learn Japanese, and I learnt some before I went back to Australia, so I started to work with Japanese tourists in Cairns. There were many Japanese tourists there at that time, so being able to speak Japanese gave you an advantage.

Cairns is located in Tropical North Queensland, surrounded by beautiful Wet Tropics rainforest inland and the Great Barrier Reef off the coast. It is a town surrounded by World Natural Heritage areas and there are many things for young people to enjoy, such as rafting, parachuting, scuba-diving and 4WD tours. There are many kings of wild animals. It is such a pleasant city, and I used to guide Japanese people around Cairns and the surrounding areas. There is a coral cay called “Green Island”, where I used to work as a guest liaison officer. We used to ask the customers what they wanted to do during their stay and book tours such as scuba-diving and glass-bottom boats. While I was working in Cairns, I met my wife. She is from Kagoshima, and she was also working in Cairns.

-So, she used to live in Australia, too?

Damian: At first, she was working on a working holiday visa, and later she obtained a working visa. She was working in a duty free shop. It was an opal shop. I pretended to be a customer and went into the shop, then I hit on her.

-So, you asked her to go out with you?

Damian: Yes. Then, she said she was from Kagoshima. I thought, “great!” She taught me some Kagoshima dialect. We got married in Australia and came to Kagoshima in 2001.

-Why did you come to Kagoshima?

To be continued vol.2 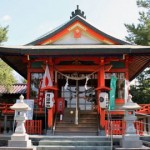