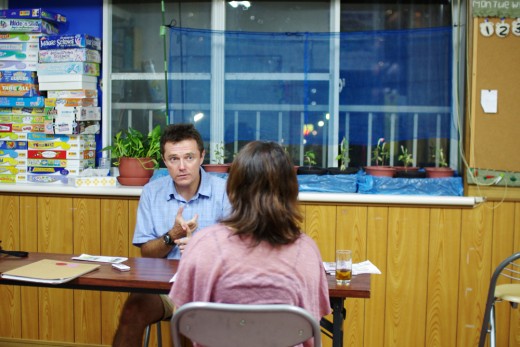 Continued from #1-1, we asked Damian Hill about his impression of Kagoshima and its people.

- What was your first impression of Kagoshima?

- What did you think about people here?

Damian: My first impression was that they are friendly. People in Kansai were also friendly around the time I met them, too. They often use the expression “Aho-ka? (Are you stupid?”), but it is not used offensively. So, I was surprised with the expression at first, but after I became used to it I felt comfortable when people asked me “Aho-ka?”

In Tokyo, everybody is so busy that even if you bump into somebody, he would ignore you. However, here in Kagoshima, people are more relaxed and Australia is the same. Australian people are also quite relaxed, so if you talk to somebody, the person would answer you and take his time. In Kagoshima, if you look like you are lost and looking at a map, somebody would talk to you. Like, “Are you all right?” or “Where are you from?”
The more cities you live in, the more you realize how kind and friendly the people of Kagoshima are in comparison with people in other cities. Kagoshima has many good things to offer and I can feel that people are proud of them. I can feel people are thinking, “We are Kagoshima people! Kagoshima is a nice place. The ash is our only problem.”

- One of the reasons to chose Kagoshima as a place to live was because of your desire to learn the Kagoshima dialect?

Damian: I had a lot of interest in the Kagoshima dialect. When I was living in Hokkaido, I found that they speak standard Japanese except for a few words, so I had no problem understanding them. The intonation is slightly different from standard Japanese, and that’s all. In Akita, they speak Zu-zu-ben (a dialect in the Tohoku region). I needed to concentrate to understand it. It might not be the same for Japanese people, but I found that I was able to understand the dialect by thinking of possible combinations.

- So, you can understand dialects by thinking of possible combinations?

Damian: I was working in Sapporo at that time, and my boss’s father who I used to call “Ojii-chan” was from Akita. In the beginning I had no clue what he was saying so I used to give perfunctory responses, but I began to understand gradually as I lived there longer. For example, when he said, “Usu nu suwatte”, “u” could have been either “i” or “u”, “su” could have been either “shi” or “su” and “nu” could have been either “ni” or “nu”, so by looking around and seeing that there was no cow (ushi), mortar (usu) or chair (isu), I was able to deduce that he was talking about the stone (ishi). He was saying “Ishi ni suwatte (Sit down on the stone).” It is fun to work out the patterns and guess what people are saying.

- Does Japan have more regional dialects than Australia?

Damian: There are no dialects in Australia. English has been used for only 220 years there, and people like moving around. For example, if one’s parents’ house is in Sydney and he doesn’t like the big city, he moves to the countryside, and the opposite case also exists. I grew up in the country thinking, “This town is boring – I want to move to the big city,” so I moved to Sydney as a teenager. Some people get married in Sydney, have children, then move to the countryside to provide a better environment for their children to grow up in. Australia is a big country with varying climates, so some people from Melbourne might hate the winter there and move to Cairns, or travel to Cairns and find somewhere nicer on the way and decide to move there. Many people move around like that. Of course some people live in different places because of their jobs, so the language people use mixes up quite a lot.

In Japan, for example, if a person from Kagoshima goes to Tokyo and speaks Kagoshima dialect in a train, other passengers would be able to tell that he is from Kagoshima, whereas in Australia, if a person from Sydney goes to Perth and speaks in a train, nobody will recognize his Sydney accent. The only real difference in language is that people from larger cities tend to speak faster than people from the country. Maybe country folk speak more slowly because they have more time on their hands.

I think it is the same in Japan. People who aren’t that concerned about time tend to speak more slowly. If a city person and a country person talk to each other, the city person might be irritated and want the other person to talk more quickly.
In Australia there are different words specific to different regions, but we always understand each other.

- You were not reluctant to move to Japan?

- So, you understand Kagoshima dialect by thinking of possible combinations?

Damian: Yes, the same as Zu-zu-ben. In Kagoshima dialect, words are shortened or a “ka” is placed at the end. For example, “atsui” becomes “atsuka”, and “yoka” means “yoi”.

Those words are easy to understand, but sometimes there are trickier words to work out. Once I spilled beer, and someone said “attarashika”, so I said “Oh, you mean atarashii, right? Is this beer new?” But, he said “No, that’s not what I meant”. It means “mottainai(wasteful)”.

To be continued vol.3. 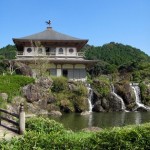