Cruising around the world on a luxury cruise ship would be marvelous.

We hope people who come to Kagoshima have a great time here! 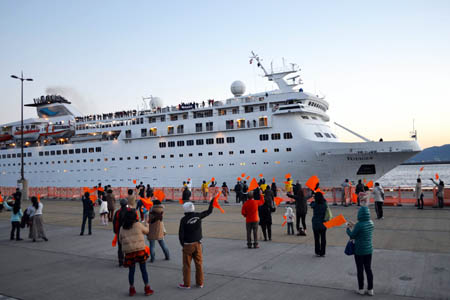 Yumeminato Kagoshima (NPO) was established with the aim of making kagoshima waterfront popular and integrating visitors and the local community.

Also, they hold some walking tours around cultural and historical heritage sites in the Kagoshima port area, and they also have a cruise ship tour.

For details of the tour, please see the Yumeminato Kagoshima official site.

*The schedule below is subject to change due to the weather.

*No cruise ships calling at Kita-futo in December

*No cruise ships calling at Kita-futo in December