Island of bull fighting and beautiful sea. Bull fights are a traditional form of entertainment on the island which has over 600 years history.
Many sport events like triathlon and diving festival are held throughout the year.

Tokunoshima lies south of Amami-oshima and north of Okinoerabu. It spans 25km from North to South and 18km from West to East and with a population of about 30,000. It is often neglected by tourist who favour larger islands like Amami (with its Mr. Donuts), or are seduced by the excitement offered on Okinawa. But Tokunoshima has much to offer, with its enchanting sights and warm-hearted, friendly and extremely helpful people.

There is something for everyone on this beautiful coral island, and it is the perfect place to get away from the hum drum of city life, as it isnﾕt like being on the mainland and although I will try to explain why, it may take a trip here to fully understand the reasons.

Tokunoshima is divided into three Chos which are from largest to smallest; Tokunoshima, Isen, and Amagi. They all have spectacular view points overlooking the coral coast line and the beaches here are hard to rival, the sea caters for all manner of sports with good surfing, scuba diving, body boarding, swimming and of course snorkeling, there is also an annual triathlon which is held at the end of June each year. In fact, Tokunoshima is nick-named sporty island and has very good community sports facilities as well as boasting three golf courses, although, it has to be said that you take your life in your hands on some of the fairways, as they criss-cross in a slightly dangerous mannerﾉ which, in my opinion adds to the excitement of the game!

Bull fighting is the islands unique spectator sport in which two bulls fight each other in a bull sumo style. The atmosphere at a bull fight is incredible with the roars from the crowd and the joyful dancing after a win. The Bulls here are treated like Godﾕs and it is a rather lucrative business for those involved.

The natural beauty of this island is quite breath-taking. Mushiroze is the only place on the island where there is an abundance of huge flat rocks, everywhere else is coral and this makes a great fishing site and a quiet relaxing place to watch the waves and the sun set over the ocean. Inojoufuta looks like a pair of glasses naturally crafted out of the coral and Inutabumisaki is a World War II memorial sight and although the concrete monument is a bit of an eye sore to say the least, the view from here is absolutely incredible.

The temperature here reaches highs of about 35 degrees and lows of 9 degrees. Being a sub-tropical island many varieties of fruit are grown here, pineapples, mangoes, and passion fruits to name a few. Some of the food here has a heavy Okinawan influence and one of the island specialities is Goat.

I realized after only three months here that I would be staying for two years at least. I have been welcomed with open arms and have made the most wonderful friends. I hope that you feel inspired to pay Tokunoshima a visit. Amagi cho Yakuba have beautiful beach bungalows to rent out at very reasonable prices and there is also a camp site at Aze Prince beach. Take the time to make the trip, you wonﾕt regret it. 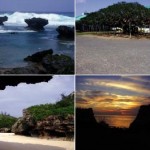 Okinoerabu which is called the "Island of Fl...