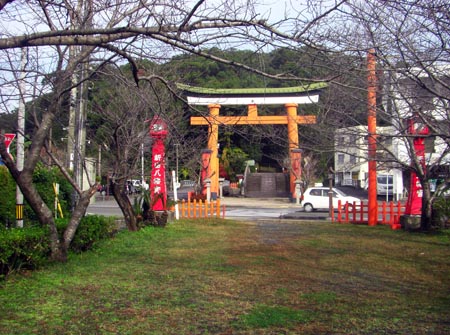 (Photo: The approach to the shrine)

Nitta shrine is a popular cherry blossom viewing spot.
It is not difficult to imagine the history of the shrine looking at the big approach to the shrine which continues from the cherry-tree-lined path.

Once, this shrine was ichinomiya (a shrine occupying the highest rank among the shrines of Satsuma).
However, there was an argument with Hirakiki shrine about it and there hasn’t been a final decision. But, Tadamune Shimazu, the fourth head of the Shimazu family dedicated a sword and a sacred horse to Nitta shrine, which is an act of admitting Nitta shrine as ichinomiya.

The argument aside, if you visit the shrine you can’t help feeling the dignified atmosphere.

If you enter through the shrine gate, there is a stone bridge, Korai-bashi (降来橋), and you can see Mt. Shinki (神亀山). Nitta shrine and Enoyama-no Misasagi (可愛山稜 / the Imperial Mausoleum of Ninigi-no Mikoto) are on Mt. Shinki.

Nitta shrine was started with the deifying of Ninigi-no Mikoto ( in Japanese mythology, the son of Ame-no Oshihomimi-no Mikoto, and grandson of Amaterasu, who sent him down to earth to plant rice there) and Enoyama-no Misasagi (the Imperial Mausoleum of Ninigi-no Mikoto) has been under direct control of the Imperial Household Ministry since 1874. 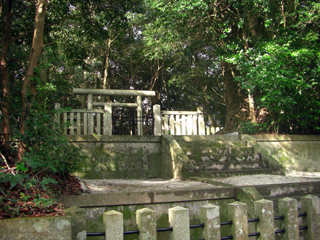 This is Enoyama-no Misasagi. It is located at the end of the right path from the front of Nitta shrine. The Imperial mausoleum is occupyes four fifths of Mt.Shinki. The atmosphere is very different from the shrine here. The Imperial Family has worshiped at this place nine times.

Now, let’s see Nitta shrine which is located on the same mountain as the imperial mausoleum.
Three little shrines are located on the way up to the shrine. 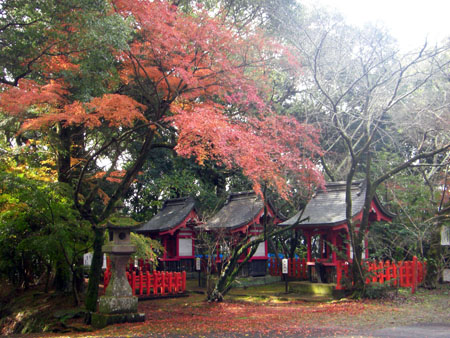 Here are two Garappa (yōkai, a class of supernatural monsters found in Japanese folklore) statues which have a mysterious anecdote. 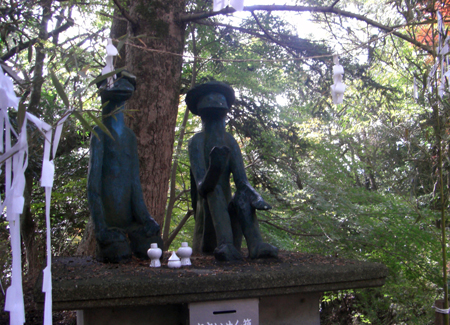 They are called Izanagi Kappa and Izanami Kappa.

There is a parody kingdom (activities run by an organization for the revitalization of the area) here in Satsuma-sendai city. It is called “the Sendai Garappa Republic”.

On the foundation day of the Sendai Garappa Republic, these two statues were situated at the event site as displays, but they moved onto the high stand, sitting down there without being noticed by the sculptor or the person in charge.
Such mysterious Garappa statues are said to grant better fortune, wish fulfillment, protection from harm and prosperity.

Keep up the stairs towards the shrine, and you can see a big camphor tree which is said to be 650~800 years old. 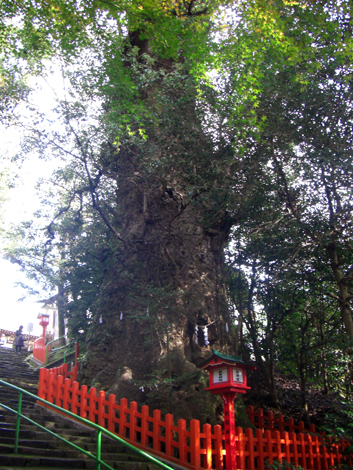 The signboard says there is a statue of a god in a hole of the tree at a height of 2m, but I couldn’t see it myself.

At the top of the stairs, there is a statue of Komainu (shrine guardian dog). 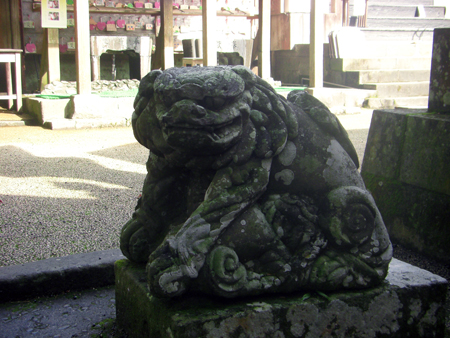 This statue also has a mysterious atmosphere. The signboard explains that the statue is called “Kodaki Komainu (hugging baby dog) or Anzan Komainu (easy delivery dog), and if you pat its head your labour would be easy.

Now, here is the main hall of the shrine. 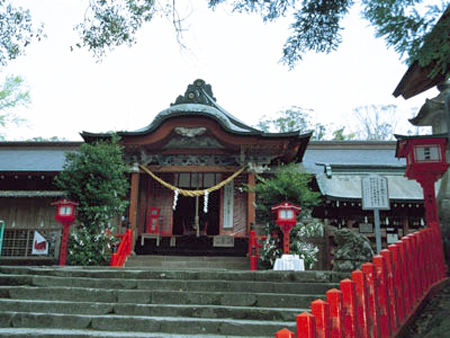 The name of the shrine “Nitta (which means new rice field)” is from a legend that Ninigi-no Mikoto conducted water from the Sendai River and made new rice fields.

This shrine is regarded as having divine favor in Peace to the household, prosperity in business, traffic safety, academic achievement, good fishing, and good health. 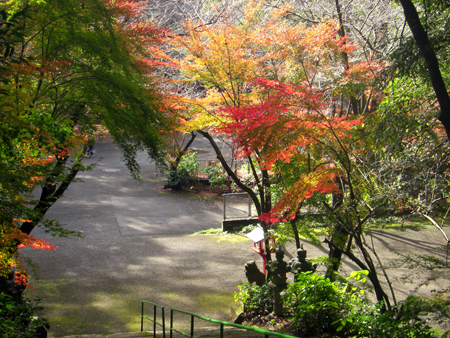 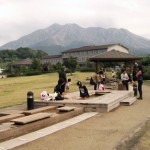 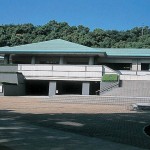